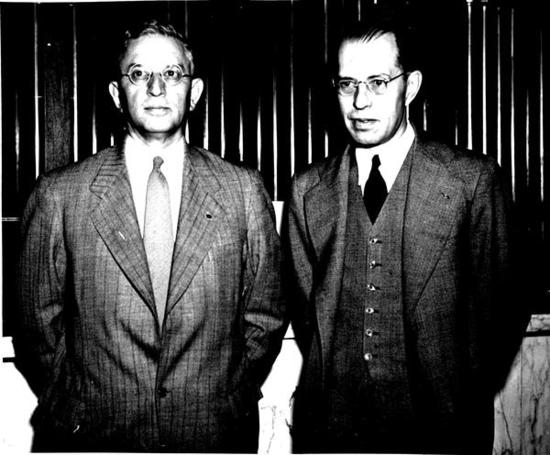 Photograph of Forrest Detrick and Arnold Wright is a picture, with genre photograph and group portraits. Its dimensions are 7.63 in. x 9.31 in..

This photo was taken circa 1950, according to Worthington Historical Society records. Forrest Detrick is on the left.

Both men spent their careers in managerial positions at the Worthington Savings Bank. From that perch, Detrick, in particular, had a hand in many of the transactions that transformed the High Street block between the village green and West New England Avenue from the 1920s through the 1950s.

Detrick also opened a legal practice as an attorney in Worthington. In 1922, while still holding a position as vice-president of Worthington Savings Bank, he acted as attorney for seven investors who incorporated the Suburban Savings and Loan in Worthington.

In 1926 Detrick purchased a property a few doors south from Worthington Savings Bank on the east side of High Street located at what is currently 656 High Street. That same year he also purchased the Welling home, a substantial house on the northeast corner of High Street and East New England Avenue. The house soon changed hands again and was subsequently demolished.

In 1927 Detrick invested in a new building on the 656 High Street site, which became the Suburban Savings and Loan Building. It was, according to the Worthington News, a “splendid new structure” that “adds much to the appearance of Worthington’s main thoroughfare.” Detrick and the Suburban Savings and Loan Company owned the property jointly, with the bank occupying much of the first floor. Detrick also had a law office in the building. The Worthington News wrote, “Mr. Detrick who is known as one of Worthington’s most progressive and foremost citizens in the development and upbuilding of the town, will conduct a general law practice. He will also be identified as attorney and director of the Worthington Savings Bank.”

A year later, Detrick purchased about half the south end of the west side of High Street. Shortly thereafter in 1928 Detrick sold the properties to Arthur L. Evans. These buildings lay just north of the Hotel Central (the Worthington Inn) and were occupied by the Kroger Grocery Store, the T.K. Stockwell Store, and the Worthington Ice Plant. Evans also purchased a two-story brick building next door, which was a hardware store owned by James F. Wright, the father of Detrick’s fellow banker, Arnold Wright. The Wright building was the original Worthington Hardware store. J. Willard Loos, Arthur Evans’ son-in-law, soon took over the hardware business.

In 1928, Wright’s hardware store was the most northern of the three High Street buildings included in Evans’s investment. In 1940, under Loos’s management, Worthington Hardware expanded by connecting the two adjoining buildings to the south to the original store. According to the Worthington News, the expansion made it one of the largest hardware stores in central Ohio. Loos continued to grow the store through the 1940s and early 1950s. Like Detrick and Wright, Loos was very engaged with local civic projects during this period and served as mayor of Worthington from 1944-1945.

Detrick was appointed assistant prosecuting attorney for Franklin County in 1932. He served in that position for six years.

Although Worthington Savings Bank survived the Great Depression, Suburban Savings and Loan did not. In June 1939 Suburban Savings and Loan was required to liquidate after the state department of buildings and loans determined that the bank was in “an unsafe and unsound condition,” according to the Columbus Dispatch. “Forrest Detrick who formerly served as a member of the board and counsel for the association, recently resigned both positions,” the Dispatch said.

In subsequent years, Detrick continued to broker property deals in the Worthington area, notably the purchase and subdivision of the Fox Lane area in the 1940s.

Arnold Wright lived his whole life in Worthington. His father was James Wright, who owned the Worthington Hardware prior to its sale in 1928. The Wright family were among Worthington’s early settlers.

It covers the topics banks and businessmen.

This metadata record was human prepared by Worthington Libraries on September 11, 2020.