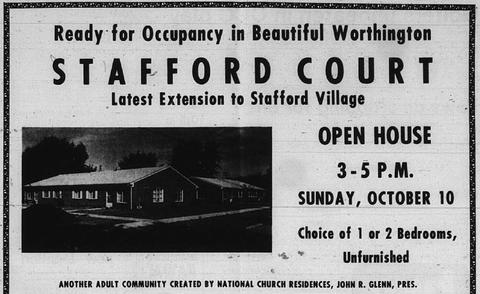 With Stafford Village in the news – plans call for a portion of it to be razed this summer and new units constructed – Worthington Memory chronicles the development almost 50 years ago of the lively little village that took root within the bounds of Old Worthington, a community intended specifically for local retirees.

By the mid-1970s, Stafford Village/Stafford Court housed 88 apartments located on either side of Hartford Street in the two blocks north of Stafford Avenue, west of Morning Street and east of High. Without an official senior center in Worthington at the time, the neighborhood became a center of activity, with non-residents attending events as well. Leon Plasterer, the resident manager, told The Worthington News in 1976, “The majority of Stafford Village residents are women, and the average age is 79 years old. They have their own council and hold assemblies on a monthly basis to discuss living conditions, hold potluck dinners in their large activities center, where they also meet for games, crafts, and club meetings, and they even plan trips to shopping centers, movies, etc.

“Stafford Village residents work hard to remain active members of the community. They work on projects, such as sewing for convalescent homes, and invite guests to speak at their meetings on politics, health, recreation, etc. Their activities center is also open for community use by reservation, free of charge.”

The idea for a retirement village in Worthington, specifically, a place where lower-income retirees could live in comfort without leaving their familiar community, germinated from the Worthington Presbyterian Church. In 1966, the church organized a nonprofit corporation, Ohio Church Residences of Worthington, to build and manage the center. According to an article in the Columbus Evening Dispatch in November 1966, the church envisioned one-floor apartments “designed for easy living and housekeeping.” Each unit would have its own kitchen.

Terms of the financing grant from the federal government’s Housing and Urban Development department included explicit conditions for which tenants could live there. Tenants had to be at least 62 years of age or older. Their annual income could not exceed $4,000 for one renter, $5,000 for married couples or $6,000 combined income for related tenants living in the same apartment complex. Monthly rents would range from $79-$99 per month, with all utilities, except phone lines, included.

At the time, the income limits would have precluded many middle class applicants. According to the U.S. Census, in 1969 (the year the first potential residents would be applying) middle household income in the U.S. would have ranged from $5,200 to $8,300. At a Worthington City Council meeting in November 1968, The Worthington News reported that a retired teacher complained his income was too high for him and his wife to live at Stafford Village.

There were other concerns, too, in the late 1960s, as the city considered the zoning and other permissions required in the run-up to the construction launch. Inadequate parking was the biggest worry. The initial proposal offered 27 off-street parking spaces for 85 units. At the time, Worthington’s code would have required 177 places for an 85-unit project. According to the Columbus Evening Dispatch, City Council was not convinced “elderly persons in a retirement center tend to give up their automobiles.”

Apartment size was also an issue. Efficiency apartments were only 19’ x 15.9’ and one-bedroom places were 19’ x 24’. In a Nov. 28, 1968 Worthington News article, City Council member Laban Smith is quoted as having said, “We want this project, but we want these people to live in dignity.”

Despite these few misgivings, in December 1968, City Council passed the ordinance that rezoned the land on the northeast corner of Stafford and Hartford. Tenants began moving in in 1971.

In 2015, National Church Residences (NCR) purchased the 65 units composing Stafford Village. NCR already owned the 23 units that made up Stafford Court, which was located across Hartford Street from Stafford Village. NCR had managed Stafford Village since 2001, although the property was owned by an independent board that included representatives of Worthington Presbyterian Church.

Melbourne Village, a similar retirement community that is privately owned, opened in 1974 on Highland Terrace in Worthington.

The activity rooms at Stafford Village and Melbourne Village were the city’s unofficial senior centers. During the 1970s, Worthington Parks and Recreation contracted with individuals to teach crafts and present cultural projects there. In 1984, Worthington Parks and Rec launched a senior activities program at the Selby Park shelter house, before leasing the space at 940 High St. on the northeast corner of North Street and High, for the city’s first official senior center. The Griswold Center opened in 1994 at 777 High St.

Stafford Village To Have Change in Directors

Stafford court is the newest extension of Stafford Village

City has site for senior center