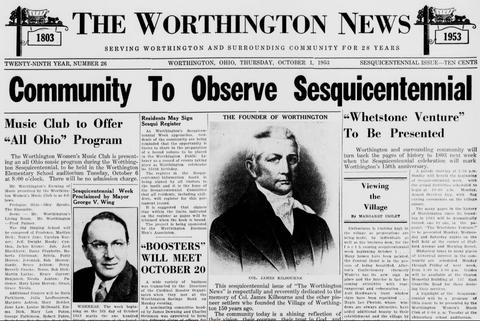 Extra, extra! Our August exhibit celebrates the digitization of almost 40 years of the "Worthington News." Now you can read and search online all the issues of Worthington's hometown newspaper from 1925-1963.

This year, Worthington Libraries has collaborated with the Ohio History Connection to digitize and make available the first 37 years of the "Worthington News" on the Ohio Memory website.

Use these fascinating issues to start or continue your genealogical research, see how fashion has changed through the years, browse advertisements from businesses both long gone and going strong and read about what was important to residents during the Great Depression or World War II.

Leonard Insley, editor and publisher, launched the "Worthington News" in March 1925. It remained under the control of the Insley family until 1989 when it was sold first to Hirt Publications, then, several months later, to Consumer News Services, Inc., a subsidiary of The Dispatch Printing Co.

From the beginning, the paper covered local government, school news and neighborhood updates on a weekly basis.

The Insley family's ownership of the newspaper encompassed an era of great change. In 1925, Worthington was a village of less than 1,000 people. By the time the recently developed Colonial Hills subdivision was annexed to Worthington in 1954, the school district had expanded to include parts of southwest Sharon Township and north Perry Township. With a population of more than 5,000, Worthington incorporated as a city in 1956, just in time to take on the challenge of Columbus' aggressive annexation policies, the stress of rapid development and the encroachment of a freeway system that threatened to bulldoze Worthington's rural edges.

The "Worthington News" maintained its distinctive local focus until it left the Insley's hands in 1989. By that time, the city's population had grown to 14,000 residents.

Old Worthington Library, 820 High Street, maintains the complete run of the "Worthington News" on microfilm, as well as other Worthington newspapers that began publication in the 1990s.

You can also search Worthington Memory's newspaper index to find specific articles and topics you're interested in. If those articles are from 1925-1963, you can then read them on the Ohio Memory website.

News to make directory of Worthington

I See By To-day's "Worthington News"

Yes, it pays to advertise in The Worthington News

In Loving Memory of our son and brother Paul Leonard Insley

Says "The News" is Fine Asset to Worthington

Worthington News to observe its 25th anniversary next week

News founded in 1925 by Leonard Insley