Groundhog Day: A Local Look Back 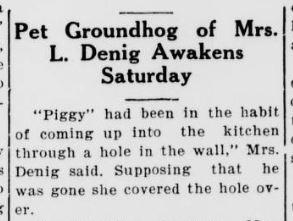 February is here, and with it the promise of spring as predicted by the whims of a large ground squirrel. This month's Worthington Memory exhibit celebrates the annual spectacle that is Groundhog Day.

"Marmot, Woodchuck, Groundhog,--his names are varied throughout his range." So does an article in the February 7, 1929 "Worthington News" describe this burrow-dwelling member of the family Sciuridae. Whatever you call it, the groundhog holds the distinction of being the only rodent to have its own designated day on the calendar. On February 2, the critter uses its prognostic powers to anticipate the arrival of spring. If the anointed groundhog comes out of its burrow to see its shadow, it will scurry back into its hole, thereby predicting wintry weather for six more weeks. If there is no shadow, tradition holds that warmer weather will arrive sooner.

The official tradition began in 1887, when the town of Punxsutawney, PA held its first Groundhog Day event at Gobbler's Knob. However, it dates back much further than that, to the celebration of Candlemas and European practices of looking to wild animal hibernation behaviors to predict the long-term forecast. A February 5, 1953 "Worthington News" article offers evidence of the holiday's tie to Candlemas, sharing the Scottish superstition that "If Candlemas be bright and clear, There’ll be two winters in the year."

This same issue of the "News" describes how Groundhog Day went locally that year: "The leaden skies of Monday morning were viewed approvingly by the initiates of groundhog esoterica. We dared to hope that Mr. Groundhog would remain shadowless presaging an immediate cessation of winter and its inevitable ills." Sadly, though, the sun burst through the clouds that day, and "a sluggard groundhog could certainly have seen a small shadow…Six weeks to go, according to our malevolent little marmot."

"Groundhog a True Prophet" is the headline of a March 3, 1932 "Worthington News" article. The groundhog failed to see its shadow that year and, nearly a month later, winter was ending quite mildly, with "numerous fishermen…enjoying the piscatorial sport in the inland lakes of Ohio."

Worthington's news stories about groundhogs don't all revolve around the February 2 holiday. An article in the August 10, 1961 "Worthington News" titled "Ungrateful Woodchuck" details the misadventures of an Ohio woodchuck found by two park wardens with its head stuck in a can of peas. "The animal was far from immobilized," details the article, "and ran about trying to elude the game men by using his sense of hearing. He even ran into the shallow water of a farm pond in his attempt to escape." After much ado, the two men caught the wily 'hog and removed the can from his head, whereupon "the freed rodent then promptly charged its benefactors."

Another wholesome tale is told on the front page of the February 7, 1935 "Worthington News." "Piggy," the pet groundhog of a Mrs. L. Denig, made a surprise appearance on February 2 of that year. He had last been seen on September 7, before going into hibernation for the winter in a burrow under the house. The barking of Denig's dog on February 2 alerted her to a noise in the wall. After "removing the covering over the hole, she called 'Piggy.' In a few minutes he came waddling out, a little stiff after his long sleep. 'Piggy' was fed his favorite dish of bread and cream and later came back for an apple. After this meal he returned to his place of hibernation, evidently to get some more sleep."

Whether it's menacing park wardens, predicting weather forecasts or just being really cute, few animals are a match for the mighty groundhog.

Which Will It Be More Winter or an Early Spring?

"Piggy" comes up to look over weather conditions

Groundhog casts no shadow as forecasters look to future