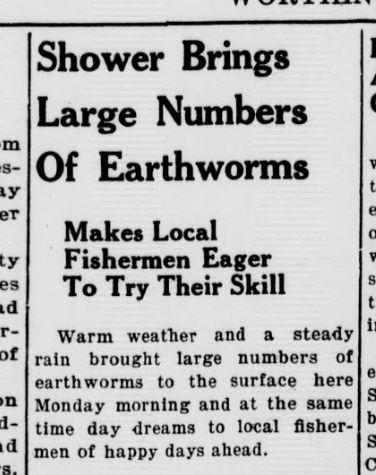 The hectic pace of the current news cycle makes it hard to imagine, but in days gone by Worthington's newspaper editors and reporters sometimes had to stretch to find topics on which to report. As the sleepy days of summer set in, kick back and relax with this selection of bizarre, silly or oddly specific headlines from Worthington's newspapers.

As a small community with a population that hovered just over 2,000 during the middle of the 20th century, Worthington had its fair share of uneventful weeks. The "Worthington News" faithfully reported on these weeks just like the other, more memorable ones-- which may be how we got headlines like "Shower brings large number of earthworms." And while it was certainly unpleasant for the subject of the article, the headline "Sprains ankle" might give pause to anyone who has ever sprained an ankle and not had it reported in the next day’s paper.

Other headlines mark the accomplishments of Worthington citizens, such as a resident who coaxed his sunflower plant into growing 12 feet tall. Some of these achievements are head scratchers. "Clemmer's macaw wins art contest" suggests an artistically talented parrot, but actually refers to the picture painted of a macaw by the contest winner. And the 1925 headline "'Henry' tries to climb telephone pole" refers not to an athletically ambitious person, but rather to a fender bender involving a Henry Ford automobile and said telephone pole.

From perusing other headlines, you might assume Worthington is being overrun by zombies, Martians, squirrels and middle-aged mutants. Or you might conclude the town is facing a plague of puns, based on headlines such as "Surely, you want temple: The Diocese doesn't need a parking lot?" or "A railing Moss gathers many targets to stone."

The articles referred to below cover topics both lighthearted and serious, but the headlines all have one thing in common: they are attention grabbers. In that, they have accomplished their goal!

A warning to boys

Playing a song 107 times in a row may be good business but is it rock and roll?

A railing Moss gathers many targets to stone

Are you ready to stomp out holiday zombies?