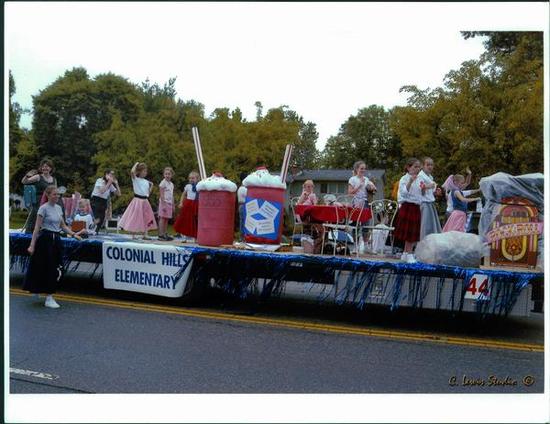 Colonial Hills Elementary and Worthington Industries Float is a picture, with genre photograph. Its dimensions are 8 in. x 10 in..

Cindy Lewis is the Creator.

Colonial Hills Elementary School and Worthington Industries, both established in the year 1955, partnered to create an "Ice Cream Float" float for Worthington's Bicentennial Parade which was held on July 5, 2003. Riders and walkers dressed in 1950's attire, danced to period jukebox music and spun hula-hoops. Two large ice cream floats were created using metal garbage cans for the cups, white batting for the ice cream and red balloons for the cherries. The "ice cream parlor" consisted of retro stools, tables and chairs resting on black and white floor tiling.

It covers the topics centennial celebrations, parades and elementary schools.

This metadata record was human prepared by Worthington Libraries on November 2, 2004. It was last updated November 4, 2019.

Summer’s here, and it’s time for picnics, swimming pools and a good old-fashioned game of baseball. What have Worthington’s residents done to beat (or embrace) the hot weather through the decades? Have a look at our July exhibit to find out!