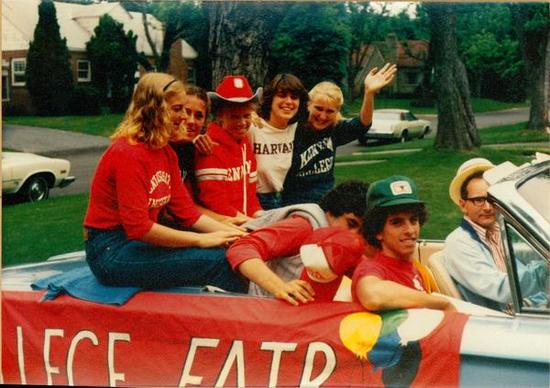 Memorial Day Parade is a picture, with genre photograph. Its dimensions are 3.5 in. x 5 in..

Dan Owens drives the Activity Club's College Fair entry with several Worthington High School students
in the 1981 Memorial Day parade. The float publicized the annual College Fair to be held in the fall. The event was organized and co-sponsored by the Activity Club and the Worthington High School Guidance Department with the purpose of allowing students and parents the opportunity to talk to representatives of over 100 colleges, universities, and technical schools.

It covers the topics clubs, Memorial Day, parades and students.

Perennial leprechaun to be 1993 parade marshal

This Week in Worthington Wednesday, December 9, 1998