Photograph of Apple Pickers Drinking at the Brown Fruit Farm 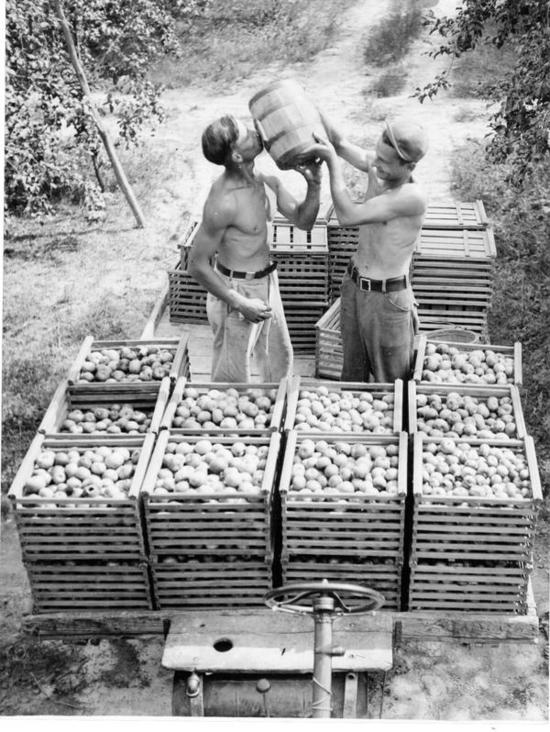 Photograph of Apple Pickers Drinking at the Brown Fruit Farm is a picture, with genre photograph and group portraits. Its dimensions are 7.9 in. x 6.04 in..

Pictured here are two apple pickers pausing in their work to enjoy a drink at the Brown Fruit Farm. During the picking season, the farm employed 35 to 40 migrant workers as pickers. As described by Bernard (Brownie) Cellar in his book “The Brown Fruit Farm: 100 Acres in Orchards,” migrant workers were typically European immigrants or those who had left inner cities in the United States to live the nomadic life of a fruit picker. They traveled from Ohio to New York to Florida to California to pick apples, peaches, grapefruit, oranges and hops. One worker could pick 100 bushels of apples a day.

The Brown Fruit Farm operated north of Worthington for nearly fifty years. The farm sold grew and sold apples and apple products such as juice, candy and apple butter, as well as cherries, plums and honey. As of 1925, the farm encompassed 100 acres planted with 4000 fruit trees and was the largest fruit farm in central Ohio. It was renowned not only for the quality of its produce, but also for its innovative roadside marketing, including signs telling motorists how many miles they were from the farm.

It covers the topics food and drink, agriculture and farm workers.

This metadata record was human prepared by Worthington Libraries on March 27, 2018. It was last updated April 4, 2018.