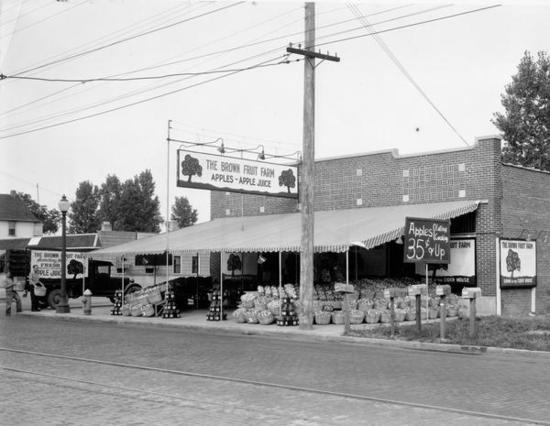 Photograph of the Brown Fruit Farm Stand on North High Street is a picture, with genre photograph and signs (notices). Its dimensions are 7.31 in. x 9.43 in..

This photograph shows the Brown Fruit Farm retail stand in Columbus. The stand was opened in 1931 on High Street just south of Morse Road, as Route 23 outside of the farm entrance was closed for repairs.

The Brown Fruit Farm operated north of Worthington for nearly fifty years. The farm sold grew and sold apples and apple products such as juice, candy and apple butter, as well as cherries, plums and honey. As of 1925, the farm encompassed 100 acres planted with 4000 fruit trees and was the largest fruit farm in central Ohio. It was renowned not only for the quality of its produce, but also for its innovative roadside marketing, including signs telling motorists how many miles they were from the farm.

It covers the topics agriculture, food and drink and farmers' markets.

This metadata record was human prepared by Worthington Libraries on February 11, 2018.