Photograph of Charles L. Tuller and Charles D. Wing, circa 1960 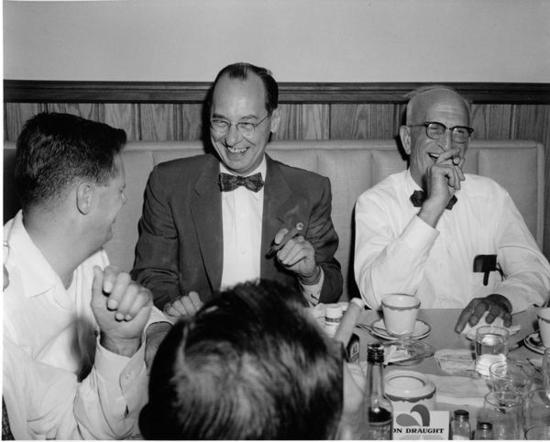 Photograph of Charles L. Tuller and Charles D. Wing, circa 1960 is a picture, with genre photograph and group portraits. Its dimensions are 7.56 in. x 9.5 in..

According to the Worthington Historical Society, this undated black and white photograph shows Charles Ludwig Tuller (center) and Charles Dignan Wing (right) seated at a banquette restaurant table facing two unidentified men. The restaurant may have been Norma's Restaurant, which was located at 666 High Street.

Both men would have been "the man to see" in their respective spheres: Tuller as a bank officer and respected farmer, Wing as the man whose thorough knowledge of Worthington’s government guided it through the transition from village to city.

Charles Tuller’s branch of the extended Tuller family owned a large farm on Sawmill Road south of 161 and north of Case Road. The property was known as Scioto Farm, and it included a substantial house dating from c. 1864 made from brick molded on site. Charles Tuller’s great-great grandfather, Bela Tuller, joined other Tuller family members in Worthington in 1806. Bela Tuller’s family settled on the Sawmill Road farm in 1836. In the years after World War II, Ohio State University made several purchases of Tuller land to be used in the expansion of Don Scott Airport and for livestock facilities for the College of Agriculture. Charles Tuller’s son sold the remaining 72 acres of the farm to a developer in the mid-1980s after operating Tuller Fruit Farm, a popular farm market featuring apples, cider, and doughnuts there for several decades.

Charles Tuller attended Kenyon College, graduating in 1925. He married Helen Young in 1927. He worked for City National Bank, and served as an assistant manager for the Worthington branch that opened in 1963.

Another branch of the Tuller family operated the Tuller grocery store located on the west side of High Street for several decades during the early twentieth century.

Charles Wing held numerous official positions in Worthington over the course of 37 years--"an unparalleled career of service to the community," according to the Worthington News. Wing first became involved in civic affairs in 1925, when he was hired as the assistant village clerk. At various times during the following years he served as acting city manager, acting safety director, acting service director, acting health director, city clerk, chief deputy clerk, mayor’s clerk, and building inspector’s clerk. In 1942 Wing was named air raid warden for Sharon Township.

In July 1918, Wing was severely wounded in the Battle of Aisne, Champagne-Marne, as a private in the American Expeditionary Force. He spent much of the next few years in and out of hospitals, eventually losing his right leg. His wife, Harriet, was an Army nurse at the base camp hospital at Camp Sherman near Chilicothe. They married in 1920. Wing's gravestone references his receipt of the Purple Heart medal.

Though Wing was born near Hiram, in northeastern Ohio, he and Harriet had settled in the Worthington area by the 1920s. Wing attended the Columbus Y.M.C.A. evening high school, winning the senior class presidency and accompanying scholarship in 1927.

The Tullers and the Wings were very active in St. John’s Episcopal Church.

It covers the topics local government officials and businessmen.

This metadata record was human prepared by Worthington Libraries on March 16, 2021. It was last updated March 23, 2021.