Photograph of the Cider Press on the Brown Fruit Farm 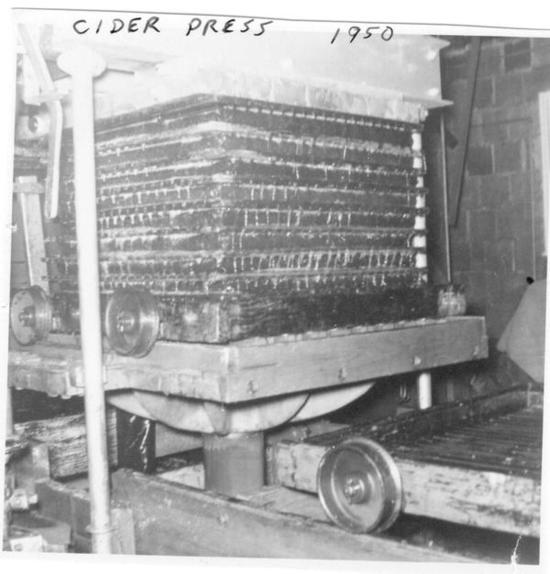 Photograph of the Cider Press on the Brown Fruit Farm is a picture, with genre photograph and agricultural equipment. Its dimensions are 3.19 in. x 3.13 in..

Pictured here is the cider press at the Brown Fruit Farm. In addition to fresh apples, apple products such as cider were very popular. The farm didn’t heat treat their cider, as it ruined the delicate apple flavor of the beverage. Instead, they made fresh pressings of cider every day in October, November and December, then delivered the cider that same day to stores throughout Columbus. Cider would remain on sale for 48 hours, after which unsold cider would be returned to the farm for use in making apple butter.

In his book “The Brown Fruit Farm: 100 Acres in Orchards,” Bernard (Brownie) Cellar, who grew up on the farm, wrote:

“Directly south of the Apple House [where apples were sorted and sold] was the Cider House where apples were cut, crushed, and pressed into apple juice. The apples sorted in the Apple House were dumped into a pit of water there and carried by water through an underground tunnel to the Cider House. A pumping system kept a constant flow from one building to the other during this procedure.

“In the Cider House, a rather complex cider press had wooden paddles on a circular chain that picked the apples from the pit of water up into a cutter-crusher. The result of this operation produced an apple pumice, which we called ‘pummies.’ The freshly cut pumice emptied into heavy cloth material on large trays, where workers spread it out evenly and covered it over. This process produced layer upon layer of pumice. These layers were then moved to a large hydraulic press where the apple juice was squeezed out and collected. It was great fun to get a glass and fill it with the freshly-squeezed juice as it ran down to the collecting vat from the ‘pummies.’ After the juice was removed, the pumice was shoveled into a collecting bin where our neighbor loaded it and hauled it to his farm for use in feeding livestock.”

It covers the topics agriculture and food and drink.