Photograph of the Griswold House Being Moved on a Truck 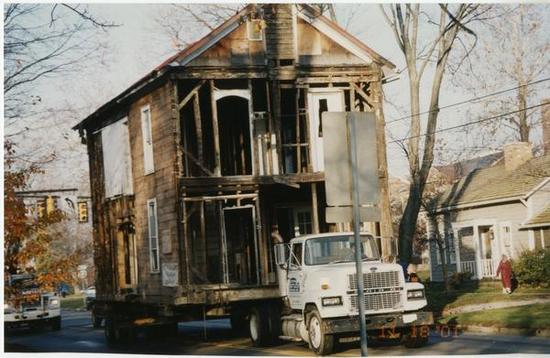 Photograph of the Griswold House Being Moved on a Truck is a picture, with genre photograph and historic buildings. Its dimensions are 3.8 in. x 5.9 in..

Joan M. Lane is the Photographer.

This photograph shows the structure known as the Griswold house being transported through Worthington on a flatbed truck on the morning of November 18, 2001. The house was moved from 788 Hartford Street to 95 East Dublin-Granville Road over the course of about 90 minutes, with residents gathered along the route watching and taking photographs.

An article in the November 21, 2001 Worthington News SNP reports how, earlier in the week, the home had been raised off of its foundations, and on the morning of November 18, was transferred onto the back of a truck owned by Northern Kentucky House Movers. By 8 am, the house was on the move. It traveled at a snail's pace down Hartford Street and Dublin Granville Road, with a crew of people working to make its journey successful and as non-disruptive to area residents as possible. Police redirected traffic, and about seven neighbors had interruptions to their electricity and cable service. The move had been planned on a Sunday morning to minimize disruptions.

The house snagged branches as it traveled, and experienced some close calls--a speed limit sign had to be quickly removed before one of the support beams caught on it, and workers had to cover some cables running across Dublin-Granville. By 9:30, however, it had made it to its destination at 95 East Dublin-Granville Road, where it remains today.

As shown in the photograph, the house was in poor shape by the time of its move. Its age and extensive termite damage had caused the house to deteriorate to the point that it was no longer habitable. The home currently at this location has the bones of the Griswold house, but it has been extensively renovated.

The November 21, 2001 News article explained that the house had been constructed in 1826 by Ezra Griswold, and was originally situated on the corner of Morning Street and Dublin-Granville Road. It was later moved to 788 Hartford Street, a lot next to the ball field and across the street from Kilbourne Middle School and the Old Worthington Library. According to Worthington historian Robert McCormick, the Hartford Street lot had been owned by the Griswold family since 1837, and the house appears to have been moved there in the mid-1890s. Peripatetic structures were not unusual in nineteenth-century Worthington, as it was often less expensive to move a building than it was to construct a new one from scratch.

After its last occupant, Mila Jeannette Griswold, died in 1998, neighbors Tom and Victoria Brankamp purchased the house and lot. According to an article in the November 14, 2001 issue of This Week in Worthington, "The two story, wood frame house is being saved from the wrecking ball by local contractor Bill Owens, who got a lot of help from the city, the Worthington Historical Society, and house owners Tom and Victoria Brankamp. He is arranging and financing the move of the house...Once in place, Owens will renovate the old structure, build a modern addition on the back, and sell the home." Owens Construction, which had assumed the financial costs of the renovation, sold the house in 2003. Proceeds of the sale were donated to Worthington’s Partners for Citizenship and Character.

It covers the topics streets and roads and homes.

This metadata record was human prepared by Worthington Libraries on April 29, 2022. It was last updated May 5, 2022.

Public Hearing Is Set On Sidewalks