Photograph of Houses at the Southeast Corner of E. North Street and High Street Looking South 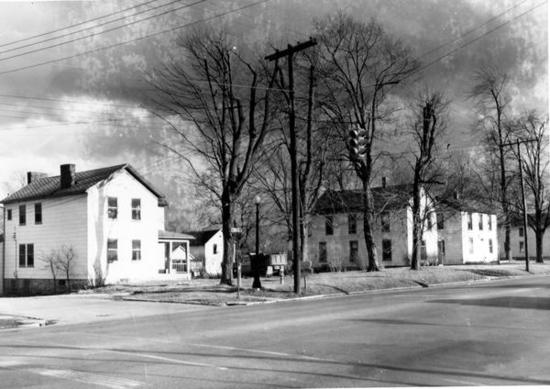 Photograph of Houses at the Southeast Corner of E. North Street and High Street Looking South is a picture, with genre photograph and historic buildings. Its dimensions are 4.5 in. x 6.5 in..

This photograph is a memento of two separate Worthington eras: the decade of 1910-1920, when the east side of High St. north of the village green was still residential, and the early 1950s when these homes were about to be erased by Worthington’s first supermarket.

The black and white image depicts the southeast corner of E. North Street and High St. looking south. Taken in winter, it shows four frame houses facing High Street, with a truck and a shed or barn in the background. It can be dated to the early 1950s, as this corner did not have a traffic light until 1949 and the houses nearest the intersection were removed during construction of the A&P Super Market, which opened in 1958.

Although the image clearly dates from the last years before the corner became a commercial site and parking lot, the information provided to the Worthington Historical Society describes the neighborhood as it was around 1910. The photograph was possibly taken by Elizabeth Buckwalter, as she had written the following notes on the back: "These houses were located at the southeast corner of North Street and High Street. Left to Right, as lived in in 1910: The Charles McGurer House; Thomas and Ada Alberts House; Myra Budd House (She was postmistress.);
The Charley Hard House. [signed] Elizabeth A. Buckwalter. Evelyn Conkle Gilbert (Mrs. John) lived in Budd house 1919-1922." The 1910 Census confirms these occupants.

Charles McGurer (1858-1927) was a self- employed carpenter. According to his obituary in the Worthington News in 1927, “Mr. McGurer, a man of sterling character, was a lifelong resident of Worthington and vicinity, and was held in high esteem by a large circle of friends and acquaintances.” His wife Mary (b. 1858) died in 1937; a Worthington directory published in 1933 shows her still living at the house on the corner of E. North St. and High.

Thomas Albert (1867-1932) served as Village Marshal from 1909 to 1917. The 1920 Census lists his occupation as “restaurant.” After his death, his widow Ada Albert remained in the house, along with her daughter Elizabeth Buckwalter (who wrote notes on the back of the photo) and family, until 1952. In 1940, her son-in-law Joseph Buckwalter is listed in the census as a telephone installer—perhaps under the guidance of his neighbor Charlie Hard.

Myra Budd (1870-1955) lived in Worthington from 1904 to 1918. Her husband, Rev. George S. Budd, died in 1906, leaving her to raise her five children in the house on High Street. She taught school in Worthington for three years before becoming Worthington’s postmaster from 1909 until 1917. At the time, the post office was located in a storefront on the west side of High south of the village green. In 1917 she was appointed to the food rationing agency for Franklin County during WWI, where she was responsible for rationing sugar countywide. During her time in Worthington she remained very active in civic affairs.

Charles R. Hard (about 1879-1946) worked as a lineman and cableman for the Ohio Bell Telephone Company for 38 years, beginning in 1905 with the Worthington telephone company. In 1926, at age 48, he fell 25 feet from a telephone pole near the OSU campus on E. Sixteenth Avenue. Hard had no memory of the accident and multiple fractures; nonetheless, University Hospital physicians pronounced his condition “not serious,” according the The Dispatch. He worked another 18 years for the phone company before retiring and opening a restaurant on East Third Ave. in Columbus. He also served on Worthington’s village council and was president of the Worthington Band.

It covers the topics streets and roads and homes.

This metadata record was human prepared by Worthington Libraries on February 3, 2021. It was last updated February 9, 2021.

Tour of Homes and Gardens: Organizers aim to show variety found in city

City moves ahead on road improvements