Photograph of Workers Pruning Trees at the Brown Fruit Farm 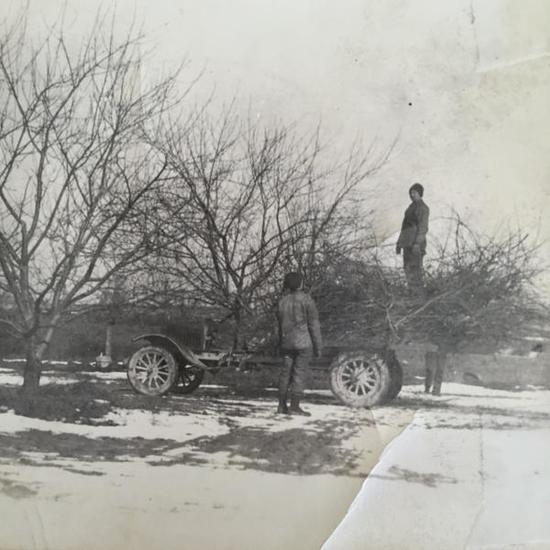 Photograph of Workers Pruning Trees at the Brown Fruit Farm is a picture, with genre photograph and group portraits. Its dimensions are 8.5 in. x 8.5 in..

Workers are shown here pruning trees at the Brown Fruit Farm during winter. Pruning apple trees was a yearly task on the farm, with workers cutting off twigs and branches and using these to create brush piles in between the rows of trees. These brush piles were ideal habitats for rabbits, which farm workers would hunt during the fall. During the Depression era, rabbit meat was one of the few meats eaten by workers on the farm.

Around 3500 hours of labor were needed to prune the orchard each winter. When the weather prevented outdoor work, employees were busy inspecting and repairing all of the farm’s equipment, to prevent breakdowns during the busy season.

It covers the topics agriculture and farm workers.

This metadata record was human prepared by Worthington Libraries on February 10, 2018. It was last updated February 12, 2018.