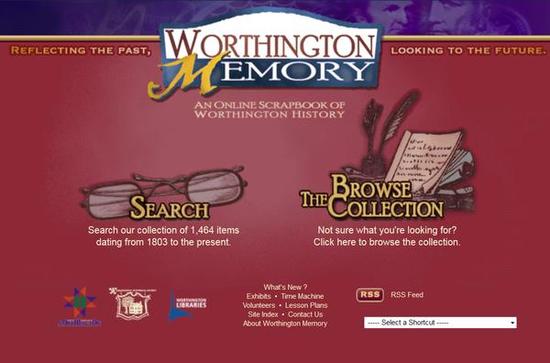 Worthington Libraries is the Creator.

The original Worthington Memory website launched on April 17, 2002, as a collaboration between the Worthington Libraries, the Worthington Historical Society and other community organizations. The goal of the project was to collect and preserve local history materials through the creation of a digital library, providing greater access to and enhanced public awareness of Worthington’s rich history.

Planning for the site began in 2001, in preparation for celebrating Worthington’s bicentennial in 2003. The Worthington Historical Society seeded the site with several hundred items, establishing a core collection upon which to build, and throughout the bicentennial celebration contributions were sought from over 30 organizations. Photographs, documents and other items from bicentennial events were also included in the website’s collections.

Over 50 community volunteers spent hundreds of hours scanning and uploading digital images and indexing newspapers. In 2004, as his Eagle Scout service project, student volunteer Joe Miracle expanded the call to for submissions to individuals. His efforts resulted in the addition of approximately 600 images to the site.

The site grew to include more than 1600 digital images of historic artifacts, documents and photographs (what are termed “scrapbook items” in the current site), as well as an index of over 90 years of Worthington newspapers. The project also included a cemeteries database, with burial information for Walnut Grove, Flint, and St. John’s Episcopal Church cemeteries.

The scrapbook items, newspaper index and burial records are still available and integrated into the new Worthington Memory site. In addition, the new site offers tools and features that make it easy to explore and make connections between the people, places and topics from Worthington’s past.

It features the person Joe Miracle.

This metadata record was human prepared by Worthington Libraries on March 31, 2015. It was last updated October 13, 2017.