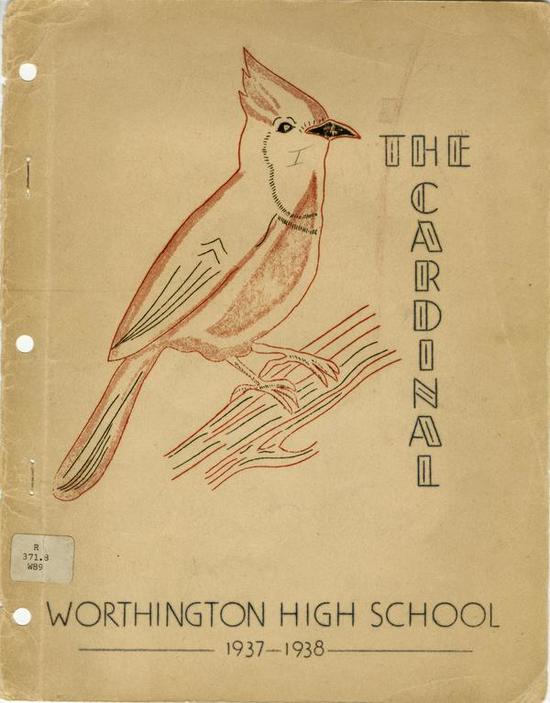 Worthington Libraries is the Contributor. Worthington High School is the Creator.

This is the first issue of The Cardinal magazine, written and published by students of Worthington High School in November 1937. These students were participants in the "Commercial Department," a curriculum developed by TWHS teacher Thelma Sams-McCormick that included shorthand, typewriting, and bookkeeping instruction. The front matter of this issue describes the magazine as "one of the first mimeograph productions of the one-year typewriting classes," while then-superintendent of Worthington Schools D. S. Wickerham adds, in his editorial found near the middle of this issue, that the magazine’s purpose is "…not to be filled with trifles. Rather, it is to be an organ to acquaint the public, periodically, with the work of the school." Despite the seriousness of their charge, the creative team of Cardinal magazine still managed to mix humor, cultural commentary, and even gossip into the magazine’s pages while documenting student life during the 1937-'38 school year.

The features in this issue include global current events ("no opposition is developing to Stalin in the Russia political campaign"), updates on student activity groups and athletic teams (the football team had an especially rough season), and short fiction and poetry by WHS students and students in earlier grades (the Thanksgiving holiday was the focus of several of these pieces). A vocabulary test, a suggested reading list of books published in the preceding two years, reviews of popular movies and radio programs, and a satirical guide to limiting the use of jargon in professional writing are also included.

The "Building Program" article in the latter half of the magazine announces impending plans for the construction of "a new elementary and junior high school building," which would be completed in 1938 and is currently known as Kilbourne Middle School. The school building that had previously stood at the same site was razed in 1937, requiring students and classes be temporarily moved to alternate facilities.

This metadata record was human prepared by Worthington Libraries on August 12, 2022. It was last updated August 29, 2022.

October's arrival means the new school year is in full swing, bringing with it a new slate of social and academic activities. Recent students of Worthington Schools may feel busier than ever, but their predecessors were active, too!