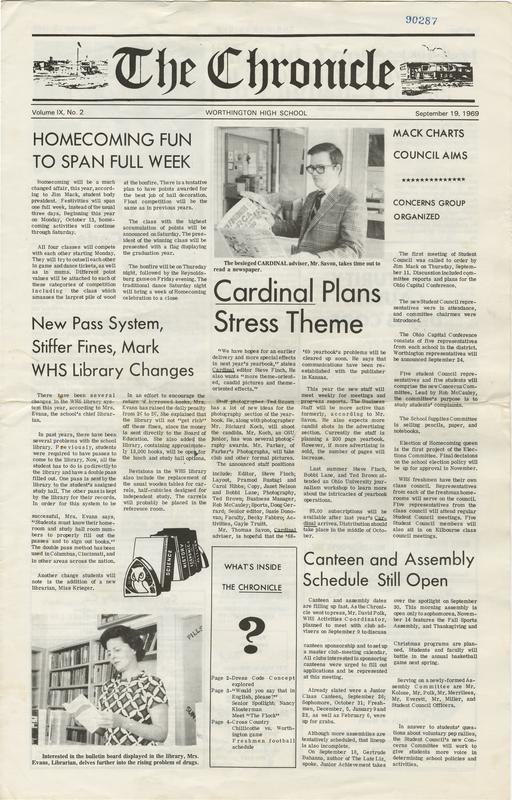 This edition of the Chronicle, the Worthington High School student newsletter, covers several topics, many dealing with changes to school organizations including discussion over the dress code, new library policies, homecoming week and improvements to the yearbook.

The front page of the newsletter includes articles dealing with changes to existing school institutions:

“Homecoming fun to span full week” announces that homecoming celebrations will expand from three days to a week and include numerous competitions between the classes and a bonfire in the days before the dance.

In “Cardinal plans stress theme,” yearbook editor Steve Finch shares that they plan to design around a theme moving forward and adviser Mr. Thomas Savon, who appears in a photo with the article, hopes to improve on the previous year’s yearbook by having the publication out sooner and that it will cost $5.

Page two provides multiple editorial and informational articles concerning school dress codes, specifically in regards to girls wearing slacks and boys having long hair. One article proposes the need for a dress code because of the immaturity of students, while another is a reprinted article from Birmingham to give a viewpoint on dress codes across the country. A third article outlines the history of dress codes at WHS that involved a committee being formed in the past to give official recommended changes which were ultimately all rejected. An Editor’s Note states that the Chronicle intends to continue covering the topic in future issues, and requests that students submit any information they might have about what dress codes are like at other schools.

Page three is more lighthearted content including a “Senior Spotlight” featuring Nancy Klosterman who is pictured posing in front of her piano. “Would You Say That In English, Please!” interviews students to ask how they would react to being caught holding hands with someone, but the question is posed with the phrase ‘premarital interdigitation’ with the responses of numerous staff and students listed. “Flock homes in on new disc” is a brief music review for a Chicago band The Flocks and their new self-titled first album.

Page four covers sports, and lists the Cross Country and Freshman Football schedules along with an article detailing the WHS football team’s recent loss to Chillicothe.

Ads for local businesses are listed throughout pages two through four, and an inset on the second page indicates that The Chronicle was a subscription newsletter published biweekly. Students paid $2 to receive 18 issues per year.

This metadata record was human prepared by Worthington Libraries on January 7, 2020. It was last updated January 8, 2020. 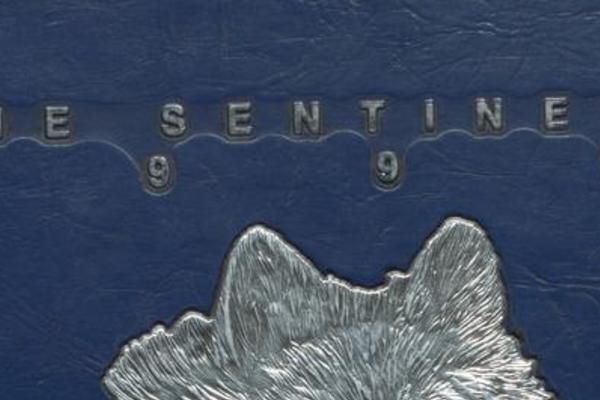