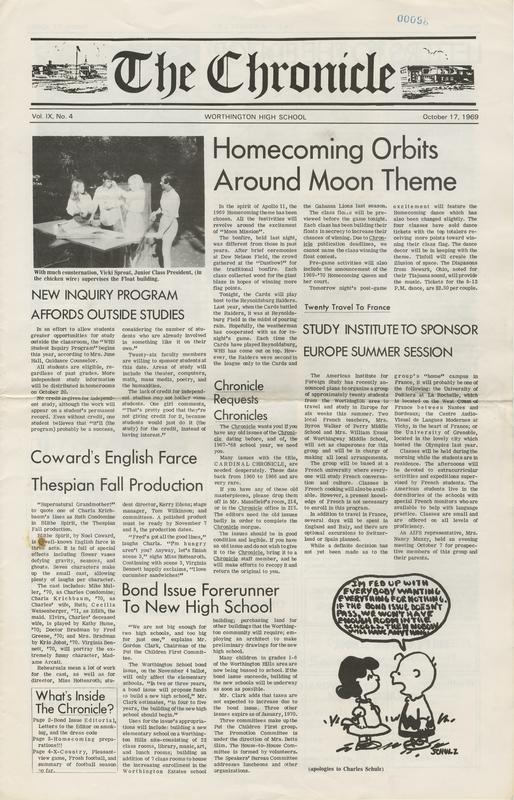 Worthington Schools is the Creator.

This edition of The Chronicle, the Worthington high school student newsletter, covers several topics, including Homecoming, study abroad opportunities, and numerous letters to the editor on a variety of issues.

The front page of the newspaper has several articles dealing with academics and bond issues:

“New Inquiry Program Affords Outside Studies” details a new independent study program called the ‘WHS Student Inquiry Program’ that will allow students to pursue specialized interests under faculty instruction. No credit will be given, but people are hopeful that this will mean only truly interested students will enter the program.

“Homecoming Orbits Around Moon Theme” discusses the ‘Moon Mission’ dance theme and traditional bonfire event. The four high school classes also will be creating floats to be revealed before the Homecoming football game against the Reynoldsburg Raiders.

“Twenty Travel to France: Study Institute to Sponsor Europe Summer Session” introduces the news that that the American Institute for Foreign Study will get a group of twenty Worthington students together to travel to Europe for six weeks in the summer. The majority of the stay will be at a French university, but there will be day trips to other countries as well. The students will interact closely with French students during their time overseas and will live in school dormitories.

In “Chronicle Requests Chronicles,” the Chronicle puts a call out to students and faculty asking if anyone has older copies of the newsletter in order to complete an archive of past issues, especially from the time with the publication was called the Cardinal Chronicle.

“Bond Issue Forerunner to New High School” looks at the Worthington school bond on the November ballot, which will only affect the elementary schools, according to Gordon Clark, Chairman of the Put the Children First Committee. They hope to use the funds to build new schools, and in a few years will address the need for a second high school.

Page Two of the newsletter looks at numerous letters to the editor, covering issues including the school dress code and a new school policy on smoking.

In her letter, “Dress Code Debated,” Diann Enyart wrote in to disagree with the content of the previous article “Immaturity Causes Dress Code” and express her opinion that appearance has nothing to do with student performance. She states that all students are being punished with a stricter dress code due to the actions of a few.

In “A Letter to Mr. Wion,” Debbie Robbins directly addresses Mr. Wion and questions why, as a coach, he is not allowing the senior boys to get as much playing time as the underclassmen. There is a note following the letter that states that Mr. Wion did not submit a reply.

An anonymous student submitted “Who’s a Hippy” to say that the student is being unfairly taunted and called names by fellow students due to the clothes this student has chosen to wear, and asks that this behavior please stop.

The author of the letter “Smoking Rule Unfair” questions why the smoking policy recently changed to also punish students for being in possession of cigarettes. The author states that it is an infringement on personal rights, especially as the rule does not also apply to teachers. The Chronicle interviewed Mr. Koloze for a response, and he said the rules were made in an attempt to discourage students from a dangerous habit.

In the only Editorial on the page, “Bond Issue Vital for Growing School,” the author stresses the overcrowding in schools and how it will only get worse in the future. The author makes it clear that there is an absolute need for the $2.4 mil bond to pass in November.

The second page of the Chronicle also includes ads for local area businesses.

Page Four has a rundown of the Cardinal sports events for the week:

In “X-Country Men Look to State,” the Cardinal boys’ cross-country team has been racking up victories against schools like Marion Harding and Whetstone, but Coach Eisenhart is concerned that they still do not have a ‘fifth man’ stepping up from the reserve team to help out. Based on the team’s performance so far, the coach and its runners are optimistic about their opportunities to win the state title.

“Cards RIP P-V 16-14” details a close football game between the Cardinals and Pleasant View, in which Worthington ultimately won a narrow victory.

Even though the football Cardinals have a record of 3-and-2, “Cards Vie for OCC Lead” points out that the team is undefeated in OCC play. The article details the season’s results, and mentions there is a three-way-tie for the OCC lead with Delaware and Whitehall.

“Freshman Progress” details a recent win for the Freshman football team over Gahanna Lincoln, which bolstered their confidence after a loss the previous week, and Coach Beahm is hopeful it’s a turning point for the team morale.

As Worthington residents continue to social distance, many may pine for adventures considered commonplace, or at least more attainable, in years previous. Worthingtonians are no strangers to finding zest in life whether it be distant travel, or finding fun closer to home.