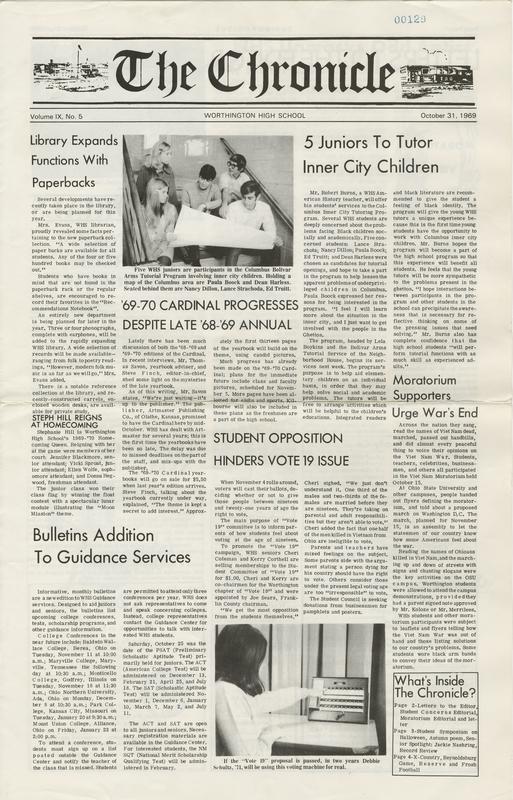 This edition of the Chronicle newsletter covers a variety of topics, including academics, sports and student accomplishments.

"5 Juniors To Tutor Inner City Children" describes the work that five WHS juniors will be doing for the Columbus Inner City Tutoring Program. The goal of the program is to help lessen the social and academic problems of children in Columbus. The five juniors participating in this program are shown in an accompanying photograph.

"Steph Hill Reigns At Homecoming" announces that Stephanie Hill was named 1969-1970 homecoming queen and lists other members of the homecoming court. The junior class won the homecoming float contest with a float depicting the lunar module.

"Student Opposition Hinders Vote 19 Issue" reports on the work of the "Vote 1"' committee to promote a bill on the November 4, 1969, ballot to lower the voting age in Ohio from 21 to 19. An accompanying photograph shows a student sitting at a voting machine.

"Moratorium Supporters Urge War's End" describes the Viet Nam War Moratorium held nationally on October 15, 1969. WHS students were permitted to attend the demonstrations on the OSU campus with permission of their parents.

"Bulletins Addition to Guidance Services" announces that the WHS Guidance Services will provide monthly bulletins to juniors and seniors detailing upcoming college conferences. It also lists the dates when the ACT, SAT, PSAT and National Merit Scholarship Qualifying Test will be given.

The second page includes letters to the editor and editorials for the newsletter.

The four letters to the editor are: "Moratorium Viewed," in which the writer provides a positive review of his attendance at the Viet Nam War Moratorium held on the OSU campus; "Wion Letter Answered," in which a senior varsity football player responds to a letter in a previous edition of the paper by saying that seniors understand that their first concern must be for the team and that they do not mind playing less often so that younger players can gain experience; "Hippy-Haters Unite" is also a reply to a letter in a previous edition of the paper from a student who is a self-described hater of hippies; "WHS Manners Decried" comments on the school dress code and asks WHS boys to show more respect for the girls.

Page three of the issue includes a "Senior Spotlight" feature focusing on head majorette Jackie Naehring, who is pictured for the article. "WHS Unmasks Odd Antics In Ill-Luck Halloween" provides stories from students about past Halloween experiences. "Mayall Uses New Blues; Beatles Cut LP For All" is a music review for John Mayall's live album titled "The Turning Point" and for the Beatles' latest release, "Abbey Road." "Untitled" is a poem written by junior Hollis Muttart.

The fourth and final page of the issue highlights sports accomplishments from the previous two weeks:

"JV's Terror In OCC Play" describes the conditioning exercises used by the JV football coaches that have helped the team maintain its undefeated record in the Ohio Capital Conference. In "Freshman Coach Comments," Coach Beahm comments on the 4-1 record of the team and speculates on the possibility of any players moving to the Varsity team next year. "Cards Smash Raiders 44-6" reports on the Worthington Varsity Football Team's homecoming game win over the Reynoldsburg Raiders. "Rams Rally, Take Cards 15-14" describes the WHS loss to the Whitehall Rams in the final 36 seconds of their game. A picture from the Rams' game is included with the article.

Ads for local businesses appear on pages two through four of the newspaper, and an inset on the second page lists the 1969-1970 student staff members for The Chronicle.

This metadata record was human prepared by Worthington Libraries on February 14, 2022. It was last updated February 16, 2022. 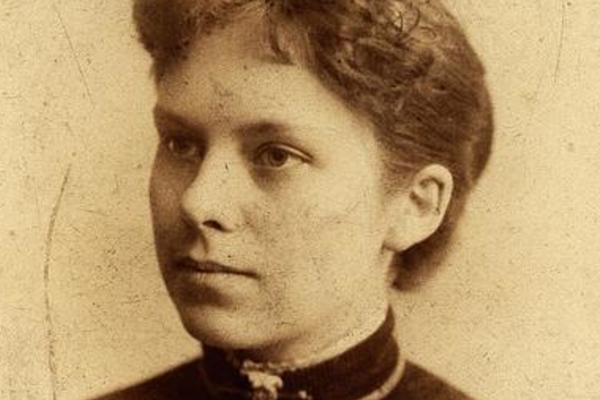 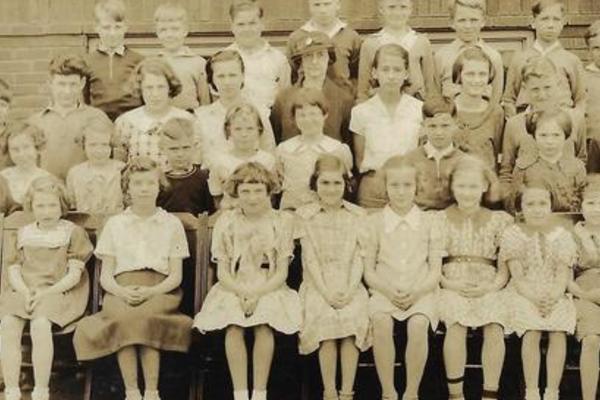 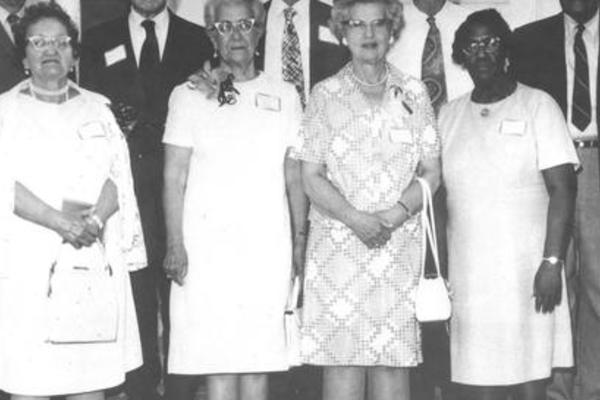