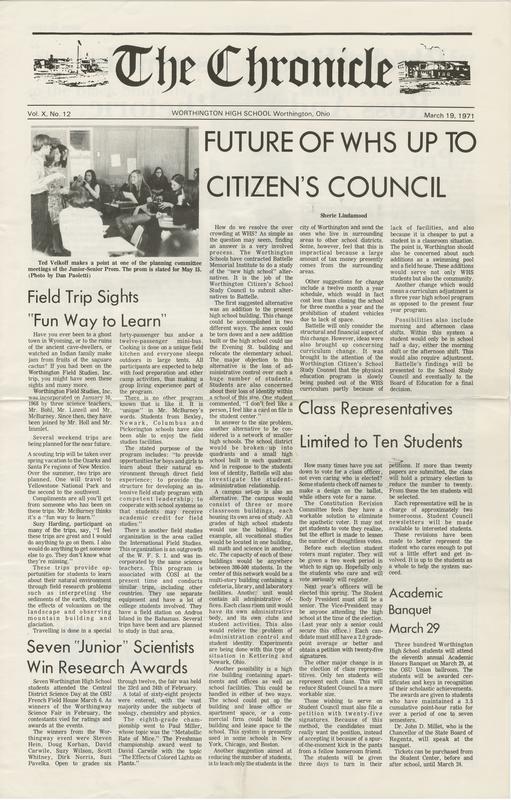 As noted in previous editions of the Chronicle, overcrowding at the high school is a real problem. The top story of this issue discusses potential solutions generated by a citizen’s school study council and put before the Battelle Memorial Institute, which Worthington Schools administration has contracted to study the problem and recommend a solution. Several options were mentioned, including adding to the existing building, constructing small high schools throughout the district and limiting attendance at the existing building to only students residing within the city.

Also on the front page is an article detailing changes to school elections, made by the Constitution Revision Committee. One of the changes mentioned is requiring students who wish to vote to register before each election. There is also a feature on Worthington Field Studies, Inc. and upcoming teacher-led trips to Yellowstone National Park and the southwest United States. Brief pieces announced winners at a recent science fair and how they fared at a district competition and mentioned an upcoming academic honors banquet. There’s also a photo taken during a junior-senior prom planning committee meeting.

Page two is dominated by a discussion of issues raised by the speaker at this year’s Black History Week assembly, professor Charles Ross, head of the Black Studies Department at The Ohio State University. An anonymous letter to the editor also mentions the assembly. Another letter writer laments the “horrendous” conditions in the boy’s restrooms, due to cigarette smoke.

Page three includes a feature of English teacher Ethel Nichols, a report of the retirement celebration for Kilbourne custodian Ralph Powell, a review of musician Johnny Winter’s recent live album, an advice column and a poem.

This metadata record was human prepared by Worthington Libraries on March 1, 2022.