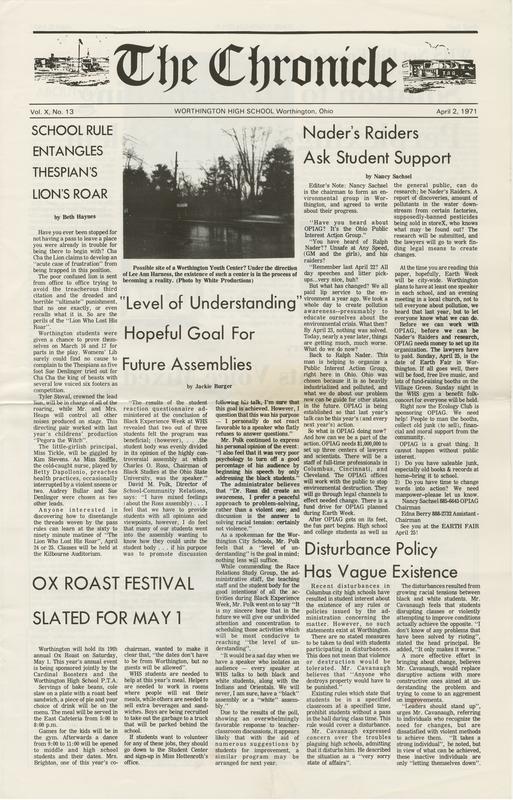 This edition offers a high school perspective of important social issues like civil rights and the environment. A front-page article, for which Worthington City Schools’ director of school-community relations is interviewed, includes the results of a questionnaire distributed to students at the end of the high school’s Black Experience Week in February. The high school’s principal is interviewed for a piece about how school administration would deal with students who participate in racial “disturbances” similar to those that have occurred recently in Columbus city high schools.

Also on the front page is a column written by the chair of the Ohio Public Interest Action Group, a nascent environmental organization, as well as details about the school’s annual ox roast and the April production of “The Lion Who Lost His Roar.” There is also a photo of the potential site of a Worthington youth center.

Page two is devoted to the issue of overcrowding at the high school. One story, written by the two student members of the Citizen’s School Study Committee, lays out pros and cons of several potential options. Another reports the results of a Chronicle student poll on the subject.

Page three includes a feature and photo of French foreign exchange student, Jean-Phillipe Pernet, as well as a short story he wrote. There is also a photo of WHS junior Karen Drukker in her costume for Ice World ’71. Details of the upcoming ice-skating event are included. An untitled poem completes page three.

Page four includes coverage of the school’s track team, a report of the wrestling team’s first district championship since 1960 and the results of the annual student-faculty basketball game.

This metadata record was human prepared by Worthington Libraries on March 2, 2022.