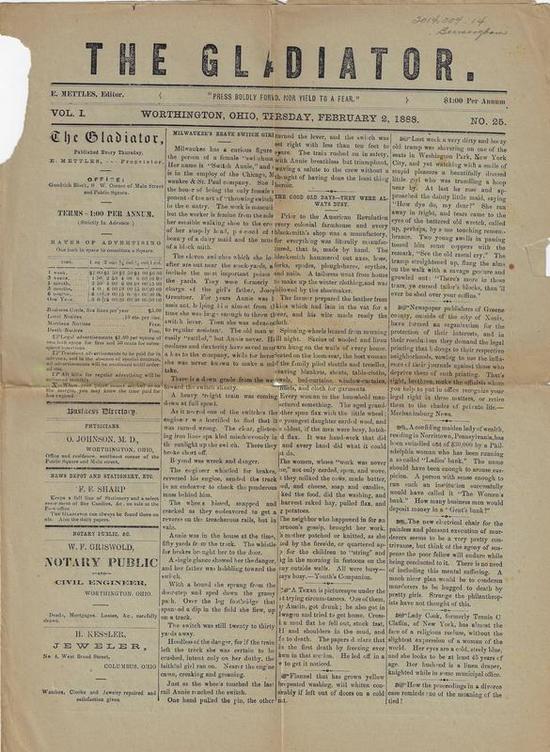 Gladiator Newspaper from February 2nd, 1888 from the collections of the Worthington Historical Society (WHS) may be used for educational purposes as long as it is not altered in any way and proper credit is given: "Courtesy of the Worthington Historical Society, Worthington, OH." Prior written permission of the WHS is required for any other use of Gladiator Newspaper from February 2nd, 1888. Contact WHS at info@worthingtonhistory.org to request permission.

"The Gladiator" was a newspaper published in Worthington from 1887 to 1888 by Ezekiel Mettles. The office for the Gladiator was located in the Goodrich Block on the southwest corner of Main (High) Street and the Public Square. Pages one and two of the newspaper contain advertisements including several for Worthington businesses, along with state and national news and short columns.

Articles pertaining to local news appear on page three. Items include that a "sleighing party numbering 11 took supper at the Padgett House on Saturday evening" (now known as the Worthington Inn), and a "watch raffle to benefit Mrs. John Huber drawn by John B. Skeels." It was reported that "Joseph Davis of Perry township, now 83 years, father of Mrs. James E. Wright of State St., received a box of fine oranges from his granddaughter in Florida." A small note indicates "Valentines are the rage this year."

It covers the topics newspapers and retail trade.

This metadata record was human prepared by Worthington Libraries on February 21, 2022. It was last updated February 25, 2022.