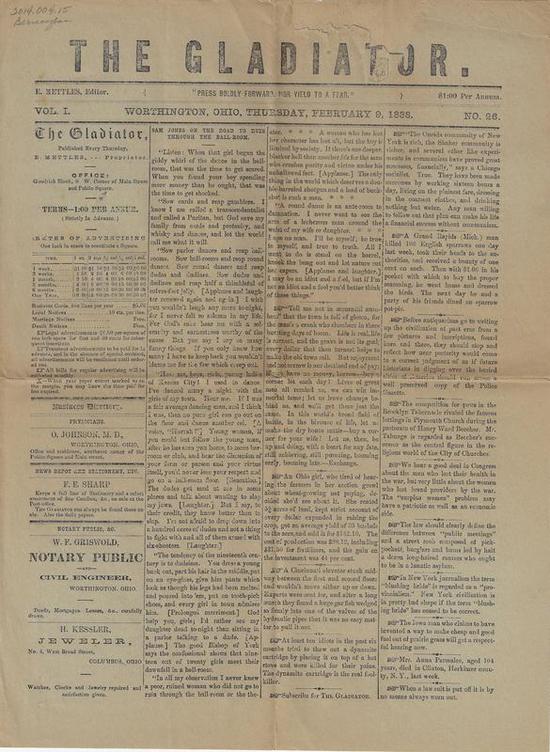 Gladiator Newspaper from February 9th, 1888 from the collections of the Worthington Historical Society (WHS) may be used for educational purposes as long as it is not altered in any way and proper credit is given: "Courtesy of the Worthington Historical Society, Worthington, OH." Prior written permission of the WHS is required for any other use of Gladiator Newspaper from February 9th, 1888. Contact WHS at info@worthingtonhistory.org to request permission.

"The Gladiator" was a newspaper published in Worthington from 1887 to 1888 by Ezekiel Mettles. The office for the Gladiator was located in the Goodrich Block on the southwest corner of Main (High) Street and the Public Square. Pages one and two of the newspaper contain advertisements including several for Worthington businesses, along with state and national news and short columns. Advertisements include "O. Johnson, M.D., Worthington, Ohio", "W.F. Griswold, Notary Public and Civil Engineer, Worthington, Ohio", and "I.G. Deardorff, Dealer in Dry Goods, Groceries, Notions, Patent Medicines &c., &c., Elmwood [Linworth], Ohio."

Articles pertaining to local news appear on page three. Notes include that "Miss Delia Conway, of Proprietor's road was ill with diptheria"; "County Commissioners have appointed Tuesday April 17th as the time for hearing the application for our corporation extension", "Farmers are getting ready for the maple sugar campaign", and "Revival meetings have been held at Bethel A.M.E. church recently. A good work was done, and some twenty members gathered into the folds of the congregation." One column states that John Skeels, 113th regiment, of Bean Hill [East Granville Road] recollected a fallen comrade, John C. Benzel.

Another interesting note is as follows: "Uncle Ben Lee, 88 and the oldest resident of Worthington, was 'seriously ill'". It is likely this refers to Benjamin Lee, an African American man who had lived in the Worthington area sixty years or more by 1888. An August 20, 1891 Westerville Public Opinion article detailed the lives of Benjamin and Jack Lee, enslaved half brothers, who were sent to Ohio in 1817 as an inheritance to Samuel McDannald of the Central College area in Westerville. They were emancipated, as slavery was not permitted in the state, but then immediately indentured to McDannald until they reached the age of 21. Benjamin Lee married Nancy Jordan in 1828, and two of the couple’s children were buried in St. John’s Cemetery in Worthington in the 1830s. In a Columbus Directory from 1878, Lee was listed as a basket maker.

Page four of the newspaper has a work of fiction and an advertisement for R. W. Evans, dealer in stoves and tinware in Worthington.

This metadata record was human prepared by Worthington Libraries on October 20, 2021. It was last updated October 23, 2021.

Warehouse Will Be Built Here by Overmyer Co.