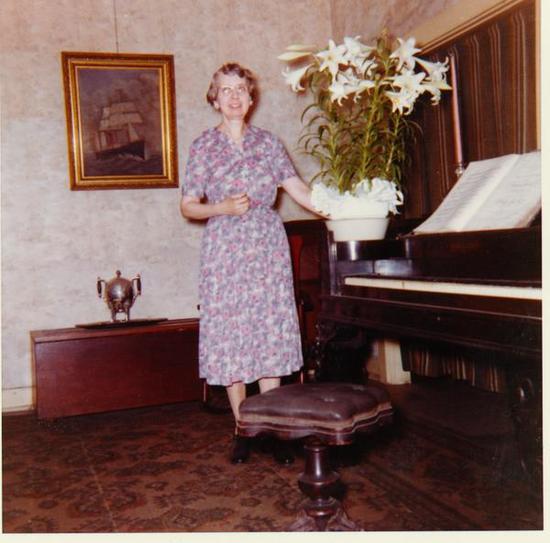 Lillian Skeele in the Griswold House Parlor is a picture, with genre photograph and portraits. Its dimensions are 3.06 in. x 3.06 in..

This color photo, dated April 22, 1962, portrays "Lillian Skeele in the parlor of the Griswold House," according to a caption from the Worthington Historical Society. The photo was taken on Easter Sunday, 1962. Skeele stands next to a pot of Easter lilies, perhaps celebrating the affinity between her name, Lillian, and the lily flowers. A tea urn, a chest or drop-leaf table, a framed picture of a sailing ship, a piano and piano stool also appear in the photo.

Mila Jeannette Griswold lived in the home at the time this photo was taken.

The Skeele family’s ties to Worthington went back more than a century. And though she lived in Columbus, Skeele retained many friends and relations in Worthington. As a children’s librarian at the Main Library in downtown Columbus for more than four decades, Skeele played a huge role promoting reading and literature for young children in mid-century Columbus. She was an active volunteer with the Worthington Historical Society. The Worthington Historical Society’s Lillian Skeele Library is named in her honor.

At the time this photo was taken, the Griswold house sat on the east side of Hartford Street next to the ball fields and across the street from Kilbourne Middle School and the current site of the Old Worthington Library. According to Worthington historian Robert McCormick, the Hartford Street lot had been owned by the Griswold family since 1837, but the house appears to have been moved to Hartford Street from another location in the mid-1890s. The structure likely arrived there after being moved from at least one site before then. Peripatetic structures were not unusual in nineteenth-century Worthington, as it was often less expensive to move a building than it was to construct a new one from scratch.

After its last occupant, Mila Jeannette Griswold, died in 1998, a neighbor purchased the house and lot. By that date, the condition of the house had deteriorated to the point that it was no longer habitable.

Now only the bones of the house live on, having moved from Hartford Street to 95 East Dublin-Granville Road in 2001. To save the building from demolition, the purchaser had donated it to the Worthington Historical Society, which in turn worked with the Owens Construction company to move and renovate it. Owens Construction, which had assumed the financial costs of the renovation, sold the house in 2003. Proceeds of the sale were donated to Worthington’s Partners for Citizenship and Character.

It covers the topics homes, Easter and historic sites.

This metadata record was human prepared by Worthington Libraries on December 9, 2020. It was last updated December 10, 2020. 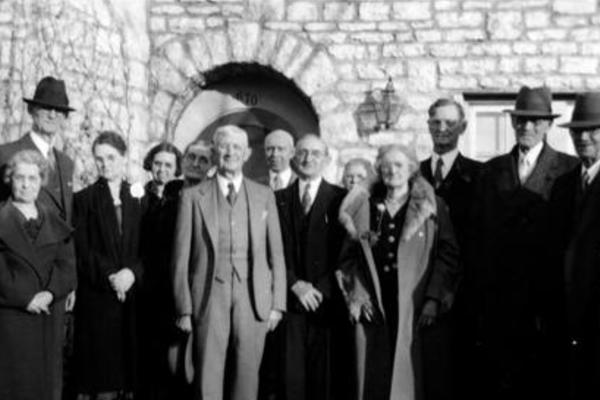