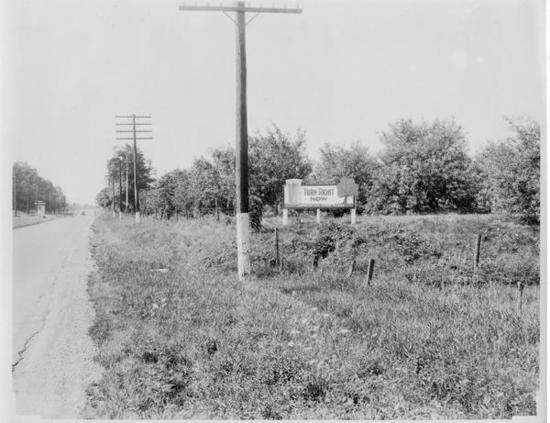 Photograph of Route 23 at the Brown Fruit Farm Entrance Looking South is a picture, with genre photograph and signs (notices). Its dimensions are 7.6 in. x 9.9 in..

Russ Cooke is the Photographer.

This photograph shows Route 23 looking southward near the entrance of the Brown Fruit Farm. Visible in the left-hand side of the photo is a stop on the Columbus, Delaware and Marion Railway or “CD&M,”an interurban electric railroad that ran through Worthington to downtown Columbus from 1903 to 1933.

The Brown Fruit Farm operated north of Worthington for nearly fifty years. The farm sold grew and sold apples and apple products such as juice, candy and apple butter, as well as cherries, plums and honey. As of 1925, the farm encompassed 100 acres planted with 4000 fruit trees and was the largest fruit farm in central Ohio.

The farm’s original apple orchards were planted around 1901, by Frank Bower, on property once owned by the Pool family. Sally and Joseph Pool came to Sharon Township in 1812, and their family gravestones have been incorporated into a restored cemetery at Highbanks Metro Park. Bower sold the orchards to William C. Brown in 1909, who few years later turned the property over to his son, Frame. Frame and his wife, Marie, and daughter, Molly, lived in the old farmhouse on the property that had been built by the Pool family. Frame and Marie Brown both passed away in 1936, when Molly Brown took over ownership of the farm, which operated until 1958.

It covers the topics agriculture, streets and roads, transportation, railroads, trees and signs.

This metadata record was human prepared by Worthington Libraries on March 19, 2018. 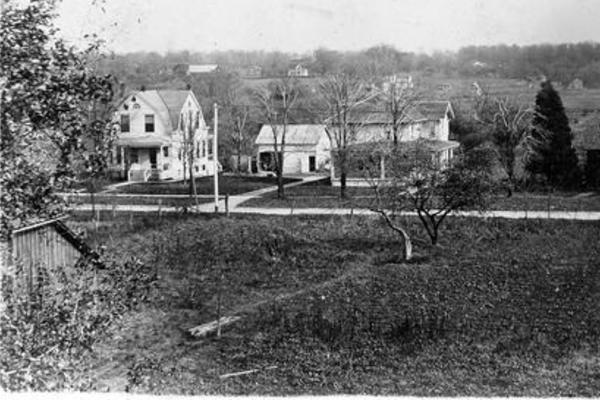