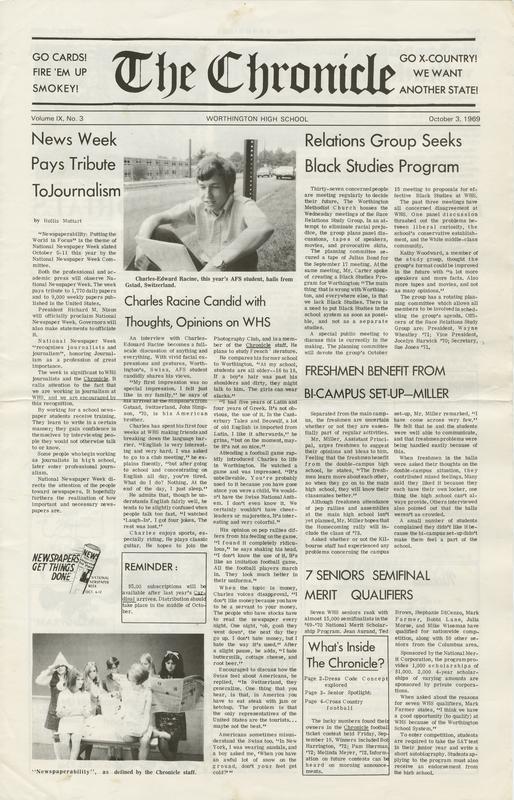 This edition of the Chronicle newsletter covers a variety of topics, including academics, sports and spotlighting various student accomplishments.

“News Week Pays Tribute To Journalism” announces the upcoming National Newspaper Week with its theme of “Newspaperability: Putting the World in Focus” which celebrates how important journalism and newspapers are to society. A portion of The Chronicle staff are shown in an accompanying photograph.

“Relations Group Seeks Black Studies Program” details the endeavors of the Race Relations Study Group to try and eliminate racial prejudice in the community and to create a Black Studies program at WHS. The members of the group discuss their efforts in finding speakers and films to present a factual argument at an upcoming proposal meeting.

“Charles Racine Candid with Thoughts, Opinions on WHS” interviews student Charles who is visiting from Switzerland and living with a WHS family. He discusses the differences between his home school and WHS, both in regards to academics and culture.

“Freshmen Benefit From Bi-Campus Set-Up – Miller” discusses the mixed feelings from the freshmen students who are on a separate campus from the rest of WHS, and feel excluded from activities.

The second page collects the editorials for the newsletter, and includes a new recurring column as well as continuing debates on the school dress code:

“What Do You Think Of The Dress Code?” is the first article in a new regular editorial column called “Students Speak Out” for which the Chronicle staff polls students on various topics. The staff also asks students to continue to submit controversial questions for future editions of the column.

Page three of the issue includes several articles on various subjects, and continues the “Senior Spotlight” feature which this time focuses on the Cardinal Football Tri-Captains Joe Miller, Jim Albright and Billy Fields, all of whom are pictured for the article. “Gang Pulls Together New LP” is a music review for The James Ganga, a Cleveland band, on the occasion of its first album release titled “Yer Album.”

The fourth and final page of the issue highlights all of the sports accomplishments from the previous week:

“Cards Impressive in Wildcat Win” gives a run down of the Cardinal football team victory over the Westerville Wildcats with a final score of 22 – 14. In “JV’s Prepare for Season” Coaches Merrill and Stephan speak optimistically about the JV football team and several strong players who hope to move up to varsity soon.

In “Harriers Look Sharp” the cross country team and Coach Eisenhart talk about their hopes for winning the state title again after winning in 1967, with their hopes bolstered by this recent victory over Lancaster.

The girls field hockey team defeats CSG in “Great Potential in ’70 Field Hockey Team” and the coach, Mrs. Howell, talks about the many talented players on the new team.

Ads for local businesses are listed throughout pages two through four, and an inset on the second page lists the 1969-1970 student staff members for The Chronicle. 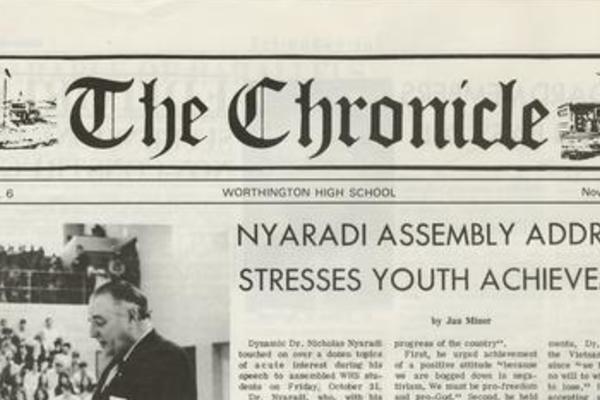